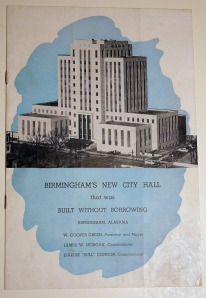 This is a Birmingham, Alabama brochure about the New City Hall that was “Built without borrowing.”  It has two interior pages.  The cornerstone was laid in 1950.  W. Cooper Green, President and Mayor James W. Morgan and Eugene “Bull” Connor were Commissioners when it was a Commission form of government.  This brochure was printed just a couple of years before the South exploded and the name “Bull” Connor became synonymous with police brutality against black men, women, and children peacefully protesting against segregation in Kelly Ingram Park.

It has lots of detail about the building, who contributed labor, material, and effort in building it.