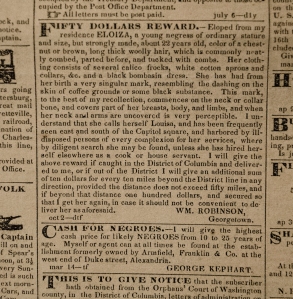 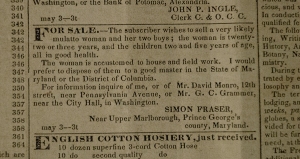 This is the full front section from the May 4th, 1838 Daily National Intelligencer.  It includes one runaway and three slave purchase advertisements.  First ad: “FIFTY DOLLARS REWARD.-Eloped from my residence ELOIZA, a young negress of ordinary stature and size, but strongly made, about 22 years old, color of a chestnut or brown, long thick wooly hair, which is commonly neatly combed, parted before, and tucked with combs.  Her clothing consists of several calico frocks, white cotton aprons and collars, and a black bombasin dress.  She has had from her birth a very singular mark, resembling the dashing on the skin of coffee grounds or some black substance.  This mark, to the best of my recollection, commences on the neck or collar bone, and covers part of her breasts, body, and limbs, and when her neck and arms are uncovered is very perceptable. I understand that she calls herself Louisa, and has been frequently seen east and south of the Capitol square, and harbored by ill-

disposed persons of every complexion for her services, where by diligent search she may be found, unless she has hired herself elsewhere as a cook or house servant.  I will give the above reward if caught in the District of Columbia and delivered to me, or if out of the District I will give an additional sum of ten dollars for every ten miles beyond the District line in any direction, provided the distance does not exceed 50 miles, and if beyond that distance one hundred dollars, and secured so that I get her again, in case it should not be convenient to deliver her as aforesaid.  WM. Robinson, Georgetown.”

Second Ad: “CASH FOR NEGROES.-I will give the highest cash price for likely NEGROES from 10 to 25 years of age.  Myself or agent can at all times be found at the establishment formerly owned by Armfield, Franklin & Co. at the west end of Duke street, Alexandria. GEORGE KEPHART

Third Ad: “CASH FOR NEGROES.-We will give cash and liberal prices for any number of likely negroes, families included.  We can be found at B.O. Shekell’s Tavern, a few doors below Lloyd’s Tavern, opposite the centre market, on 7th street.   We wish to purchase for a gentleman’s own use, a good cook 25 or 30 years of age, also a good seamstress 18 or 20 years of age, and a male house servant between 35 and 45 years of age.  BIRCH & SHEKELL.

Fourth Ad: “FOR SALE.–The subscriber wishes to sell a very likely mulatto woman and her two boys; the woman is twenty-two or three years, and the children two and five years of age, all in good health.  The woman is accustomed to house and field work.  I would prefer to dispose of them to a good master in the State of Maryland or the District of Columbia.  For information inquire of me, or of Mr. David Monro, 12th street, near Pennsylvania Avenue, or Mr. G.C. Grammar, near the City Hall, in Washington.  SIMON FRASER, near Upper Marlborough, Prince George’s county, Maryland. 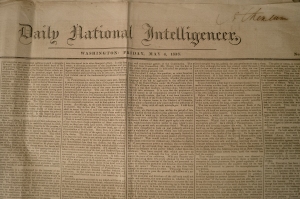