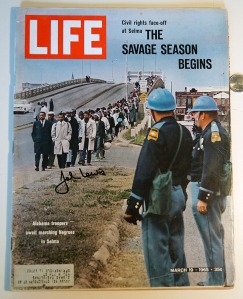 John Lewis (pictured at the front of the line on this cover) has boldly signed this March 19, 1965 LIFE Magazine that features the Selma, Alabama cover story of “Bloody Sunday”…when peaceful demonstrators were beaten on the Edmund Pettus Bridge by State Troopers.

The 1965 Selma to Montgomery marches, also known as “Bloody Sunday” and the two marches that followed, led to the passage of the 1965 Voting Rights Act, a landmark achievement of the 1960s American Civil Rights Movement. 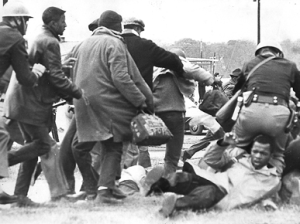 All three marches were attempts to walk for 54 miles along the highway from Selma to the Alabama state capitol of Montgomery. The first march, initiated and directed by the Southern Christian Leadership Conference’s Director of Direct Action, James Bevel, was strategized as a counter-measure to relieve the trauma and escalating anger caused by the killing of Voting Rights activist Jimmie Lee Jackson during a nighttime march in Marion, Alabama.

The voting rights movement in Selma was launched by local African-Americans who formed the Dallas County Voters League (DCVL). In 1963, the DCVL and organizers from the Student Nonviolent Coordinating Committee (SNCC) began voter-registration work. When white resistance to black voter registration proved intractable, the DCVL requested the assistance of Martin Luther King, Jr. and SCLC, who finally brought many prominent civil rights and civic leaders to support the Selma Voting Rights Movement in January, 1965. 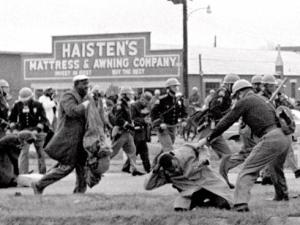 The first march took place on March 7, 1965 — “Bloody Sunday” — when 600 marchers, protesting the death of Jackson and the ongoing exclusion from the electoral process, were attacked by state and local police with billy clubs and tear gas. The second march took place March 9; police and marchers stood off against one another, but when the troopers stepped aside to let them pass, Dr. Martin Luther King led the marchers back to the church.

The third march started March 16. Protected by 2,000 soldiers of the U.S. Army, 1,900 members of the Alabama National Guard under Federal command, and many FBI agents and Federal Marshals, the marchers averaged 10 miles (16 km) a day along U.S. Route 80, known in Alabama as the “Jefferson Davis Highway”. The marchers arrived in Montgomery on March 24 and at the Alabama State Capitol on March 25. 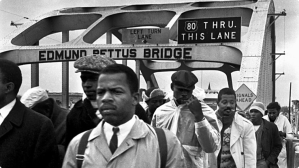 The route is memorialized as the Selma To Montgomery Voting Rights Trail, and is a U.S. National Historic Trail.

John Lewis was the youngest of the Big Six civil rights leaders and the chairman of the SNCC from 1963 to 1966, some of the most tumultuous years of the civil rights movement. During his tenure, SNCC opened Freedom Schools, launched the Mississippi Freedom Summer, and organized the voter registration efforts that led to the pivotal Selma to Montgomery marches. As the chairmen of SNCC, Lewis had written a speech in reaction to the Civil Rights Bill of 1963. He denounced the bill because it didn’t protect African Americans against police brutality nor did the bill provide African Americans the right to vote.

He graduated from the American Baptist Theological Seminary in Nashville and then received a bachelor’s degree in Religion and Philosophy from Fisk University. As a student, Lewis was very dedicated to the civil rights movement. He organized sit-ins at segregated lunch counters in Nashville and took part in many other civil rights activities as part of the Nashville Student Movement. He was instrumental in organizing student sit-ins, bus boycotts and non-violent protests in the fight for voter and racial equality.

In 1960, Lewis became one of the 13 original Freedom Riders. There were seven whites and six blacks who were determined to ride from Washington, DC, to New Orleans in an integrated fashion. At that time, several states of the old Confederacy still enforced laws prohibiting black and white riders from sitting next to each other on public transportation. The Freedom Ride, originated by the Fellowship of Reconciliation and revived by Farmer and CORE, was initiated to pressure the federal government to enforce the Supreme Court decision in Boynton v. Virginia (1960) that declared segregated interstate bus travel to be unconstitutional. In the South, Lewis and other non-violent Freedom Riders were beaten by angry mobs, arrested at times and taken to jail. When CORE gave up on the Freedom Ride because of the violence, Lewis and fellow activist Diane Nash arranged for the Nashville students to take it over and bring it to a successful conclusion.

In 1963, when Chuck McDew stepped down as SNCC chairman, Lewis, one of the founding members of SNCC, was quickly elected to take over. Lewis’s experience at that point was already widely respected. His courage and his tenacious adherence to the philosophy of reconciliation and non-violence made him emerge as a leader. By this time, he had been arrested 24 times in the non-violent struggle for equal justice. He held the post of chairman until 1966. Civil Rights March on Washington, D.C. (Leaders of the march)

By 1963, he was recognized as one of the “Big Six” leaders of the Civil Rights Movement, along with Whitney Young, A. Phillip Randolph, James Farmer and Roy Wilkins. In that year, Lewis helped plan the historic March on Washington in August 1963, the occasion of Dr. King’s celebrated “I Have a Dream” speech. Currently, he is the last remaining speaker from the march. Lewis represented SNCC, the Student Nonviolent Coordinating Committee, and at 23 was the youngest speaker that day.

In 1964, Lewis coordinated SNCC’s efforts for “Mississippi Freedom Summer,” a campaign to register black voters across the South. The Freedom Summer was an attempt to expose college students from around the country to the perils of African-American life in the South. Lewis traveled the country encouraging students to spend their summer break trying to help people in Mississippi, the most recalcitrant state in the union, to register and vote. Lewis became nationally known during his prominent role in the Selma to Montgomery marches. On March 7, 1965 – a day that would become known as “Bloody Sunday” – Lewis and fellow activist Hosea Williams led over 600 marchers across the Edmund Pettus Bridge in Selma, Alabama. At the end of the bridge, they were met by Alabama State Troopers who ordered them to disperse. When the marchers stopped to pray, the police discharged tear gas and mounted troopers charged the demonstrators, beating them with night sticks. Lewis’s skull was fractured, but he escaped across the bridge, to a church in Selma. Before he could be taken to the hospital, John Lewis appeared before the television cameras calling on President Johnson to intervene in Alabama. On his head, Lewis bears scars that are still visible today.

Historian Howard Zinn wrote: “At the great Washington March of 1963, the chairman of the Student Non-Violent Coordinating Committee (SNCC), John Lewis, speaking to the same enormous crowd that heard Martin Luther King’s I Have a Dream speech, was prepared to ask the right question: ‘Which side is the federal government on?’ That sentence was eliminated from his speech by organizers of the March to avoid offending the Kennedy Administration. But Lewis and his fellow SNCC workers had experienced, again and again, the strange passivity of the national government in the face of Southern violence.”

“John Lewis and SNCC had reason to be angry. At 21 years old, John Lewis was the first of the Freedom Riders to be assaulted while in Rock Hill, South Carolina. He tried to enter a whites-only waiting room and two white men attacked him, injuring his face and kicking him in the ribs. Nevertheless, only two weeks later Lewis joined a Freedom Ride that was bound for Jackson. “We were determined not to let any act of violence keep us from our goal. We knew our lives could be threatened, but we had made up our minds not to turn back,” Lewis said recently in regard to his perseverance following the act of violence.

In an interview with CNN during the 40th anniversary of the Freedom Rides, Lewis recounted the sheer amount of violence he and the 12 other original Freedom Riders endured. In Anniston, Alabama, the bus was fire-bombed after Ku Klux Klan members deflated its tires, forcing it to come to a stop. In Birmingham, the Riders were mercilessly beaten, and in Montgomery, an angry mob met the bus, and Lewis was hit in the head with a wooden crate. “It was very violent. I thought I was going to die. I was left lying at the Greyhound bus station in Montgomery unconscious,” said Lewis, remembering the incident.

Lewis at meeting of American Society of Newspaper Editors, 1964

The original intent of the Freedom Rides was to test the new law that banned segregation in public transportation. It also exposed the passivity of the government regarding violence against citizens of the country who were simply acting in accordance to the law. The federal government had trusted the notoriously racist Alabama police to protect the Riders, but did nothing itself, except to have FBI agents take notes. The Kennedy Administration then called for a “cooling-off period”, a moratorium on Freedom Rides.  Lewis had been imprisoned for forty days in the Mississippi State Penitentiary in Sunflower County, Mississippi, after participating in a Freedom Riders activity in that state.

In February 2009, forty-eight years after he had been bloodied by the Ku Klux Klan during civil rights marches, Lewis received an apology on national television from a white southerner, former Klansman Elwin Wilson.

After leaving SNCC in 1966, Lewis worked with community organizations and was named community affairs director for the National Consumer Co-op Bank in Atlanta.

He is the U.S. Representative for Georgia’s 5th congressional district, serving since 1987, and is the dean of the Georgia congressional delegation. The district includes the northern three-quarters of Atlanta.

Lewis is the only living “Big Six” leader of the American Civil Rights Movement, having been the chairman of the Student Nonviolent Coordinating Committee (SNCC), playing a key role in the struggle to end legalized racial discrimination and segregation. A member of the Democratic Party, Lewis is a member of the Democratic leadership of the House of Representatives and has served in the Whip organization since shortly after his first election to the U.S. Congress.

He is Senior Chief Deputy Whip, leading an organization of chief deputy whips and serves as the primary assistant to the Democratic Whip. He has held this position since 1991.