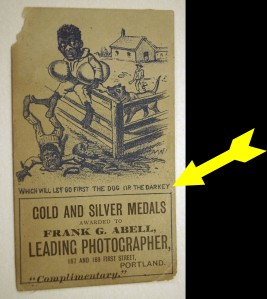 This is a Frank G. Abell calling card for his famous photography business.  It shows a black man stealing watermelons with a dog attached to his rear, while a white man with a shotgun chases him.  It says, “Which will let go first, the dog or the darkey?” Born in Illinois in 1844, Frank G. Abell opened his first gallery on his own, Abell’s Star Gallery, in Stockton in 1866. Moving back to San Francisco the following year, he then gradually worked his way north, through Grass Valley, Red Bluff, and and Yreka, arriving in Roseburg, Oregon in 1877.  From 1878 to 1888 he was based in Portland, and after a few years back in San Francisco, he continued in Portland from 1897 to 1907. Known primarily for his studio portraits, his gallery in

Portland was both spacious and well furnished, including an “elegant piano for the free use of patrons”. However, Abell also produced “Cards, Cabinets, Panels, Boudoirs, Steroscopic and Out Door Views, and Living Statues”, the latter being photos of living subjects arranged to present the appearance of a marble bust on a pedestal! 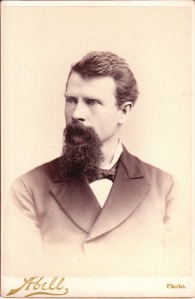