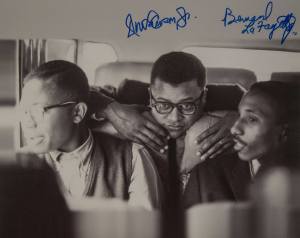 James Lawson (the man in the middle) is probably the most significant Civil Rights legend still living. He met Dr. King in 1955 (right after the Montgomery Bus Boycott) and is a huge reason why Dr. King pursued his nonviolent philosophy. Rev. Lawson is the man who personally trained the other civil rights legends such as John Lewis, Diane Nash, Bernard Lafayette, Jesse Jackson, Marion Barry, etc. James Lawson is also responsible for inviting Dr. King to Memphis to help the sanitation workers. Shockingly, Rev. Lawson was so convinced that James Earl Ray did not assassinate Dr. King that he officiated a wedding for James Earl Ray in the prison.Bernard LaFayette (on the right) participated in the Sit-ins, the Freedom Rides, and was part of Dr. King’s inner circle. He told me that he still has his key from his room at the Lorraine Motel. His was Room 206, the room directly below Dr. King’s room (306) where Dr. King was assassinated.