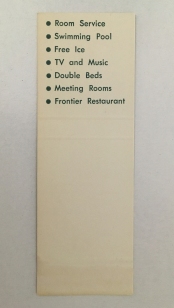 This matchbook cover is for the infamous Lorraine Motel in Memphis, Tennessee where on April 4th, 1968 Dr. Martin Luther King, Jr. was assassinated while standing on its balcony in front of room 306….

“The site began as the 16-room Windsorlorrine Hotel around 1925 and was later known as the Marquette Hotel. In 1945, Walter Bailey purchased it and renamed it for his wife Loree and the song “Sweet Lorraine”.

During the segregation era, Bailey operated the motel as upscale lodging that catered to a black clientele. He added a second floor, a swimming pool, and drive-up access for more rooms on the south side of the complex. He changed the name from Lorraine Hotel to Lorraine Motel. Among its guests through the 1960s were musicians going to Stax Records, including Ray Charles, Lionel Hampton, Aretha Franklin, Ethel Waters, Otis Redding, the Staple Singers and Wilson Pickett.

Martin Luther King, Jr., was shot at approximately 6:01 p.m. on April 4, 1968, a day after delivering his famous “I’ve Been to the Mountaintop” speech. Following the assassination of King, Bailey withdrew Room 306 (where King died) and the adjoining room 307 from use, maintaining them as a memorial to the activist leader. Bailey’s wife, Loree, suffered a stroke hours after the assassination and died five days later. Bailey reduced the operation by converting the other motel rooms to single room occupancy for low-income residential use.”