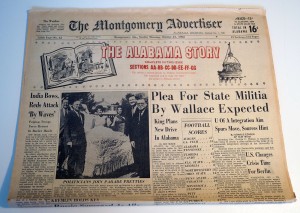 This October 21, 1962 edition of The Montgomery Advertiser has a headline of “Plea For State Militia By Wallace Expected” and includes the article “King Plans New Drive In Alabama“.  This article mentions the success of the Montgomery Bus Boycott and says that Martin Luther King “plans to recruit a nonviolent army to fight segregation in Alabama where his passive resistance move started 7 years ago“. The article titled “U of A Integration Aim Spurs Move, Sources Hint” says “Incoming Governor George C. Wallace is expected to take steps to create a state militia in the wake of an announced integration attempt at the University of Alabama.”