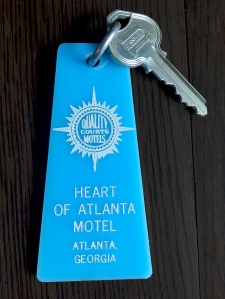 The Heart of Atlanta motel, located at 255 Courtland Street NE, was owned by Atlanta attorney Moreton Rolleston Jr.  Rolleston, a committed segregationist, refused to rent rooms at his hotel to black customers. Two hours after the Civil Rights Act of 1964 was signed into law, Rolleston filed a lawsuit for $11 million saying the law was unconstitutional. His lawsuit went all the way to the Supreme Court which would rule against Rolleston and provide a landmark ruling preventing discrimination in public accommodation.This collection consists of the key to Room #124, an oversized postcard, a regular sized postcard, and rare unused letterhead.

After the 1964 decision, Rolleston gave a brief television interview where he made several comments and read from a prepared statement saying: “This decision nullifies the rights and principles which the Constitution was designed to perpetuate. This decision opens a frightful door to the unlimited power of a centralized government in Washington in which the individual citizen and his personal liberty are of no importance. It makes possible a socialistic state and the eventual dictatorship. This is a sad day for the cause of individual freedom.”

Rolleston also backed up his public commitment to segregation in his private life by including in the deed to his nearby property, the same land that media mogul Tyler Perry would eventually purchase, the clause that people of African descent were not allowed to stay there.

Rolleston would lose this 17-acre property as part of a multi-million dollar judgement against him that came about from its own hornet’s next of litigation including claims of fraud, professional negligence, breach of fiduciary duty, and some elaborate financial moves (such as $500,000 being changed in to Deutsche marks) leading up to Rolleston’s attempt to file for bankruptcy.

In 2005 Tyler Perry purchased the 17-acre property outside Atlanta, Georgia, from the estate of the family who had obtained it as part of the judgement against Rolleston. Perry tore down the existing home and had a 34,000-square-foot, 7-bedroom, 14-bathroom house built. During Perry’s ownership of the property he was pursued by Rolleston’s endless litigation claiming the seller didn’t have clear title to the land and it still rightfully belonged to Rolleston. The high drama went so far as Rolleston being jailed for contempt, not to mention a bill of peace requiring him to stop filing lawsuits and being threatened with disbarment. Perry prevailed each time.

During one of Perry’s parties at the house he told the crowd about the prohibitions included in the original deed and was approached afterward by Congressman John Lewis, who was in attendance. As Perry relayed in an interview: “After the party, he walked up to me in tears and said, ‘I was one of the young men that sat in at his lunch counter trying to integrate. And here I am, dancing on the property that he once owned.’” In 1964, Congressman Lewis was arrested, along with several others, for trying to eat in the motel restaurant.

The Hilton Hotel now stands on the former site of the Heart of Atlanta Motel.