This 1954 racist “Christian” desegregation brochure by John R. Rice is titled “Negro and White”.  In it, the author states (regarding the lynching of Emmett Till) “That colored boy, who attempted to…seduce the…white woman, was spurred on by widespread feeling, a cocky attitude agitators have cultivated among colored people.  Remember…a white woman dare not walk the streets alone at night or go anywhere alone at night because of the animosity and the standards of the large negro population….It makes for cases of murder and rape.  It makes for some…cases in which offended white men, even good men, take the law in their own hands.“  Other excerpts: “All intelligent people ought to give southern white people credit for wiping out lynching in the South, and rapidly improving the opportunities of colored people.”

“Violent agitation goes on to stop segregation.  That agitation, I believe, is usually uninformed, and it often does more harm than good.  The agitation is often carried on by those who are not particularly good citizens nor good Christians, and very often for selfish purposes.”

“…great harm has come by undue agitation over racial issues.  I believe the Supreme Court decision itself was ill-timed, political, hurtful.”

“Therefore racially mixed marriages are hurtful and unhappy and wrong.”

“Give Negro people time to earn their place in society….However, we have seen a race of people rise up from heathen savagery in a few short years.”

“In moral standards, also, the Negro people need to grow.  We must remember that we should not expect in three generations from savagery and heathendom in Africa the cultural advance of centuries.”

“The great problem is not segregation, but sin.”

“Negro people have a wonderful racial heritage earned since emancipation.” 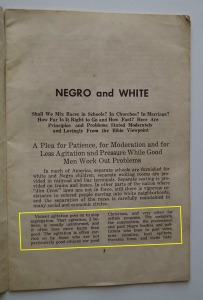 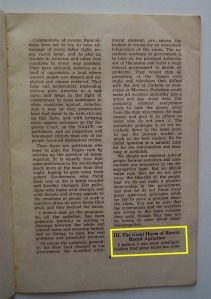 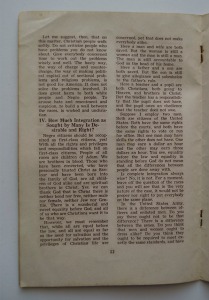 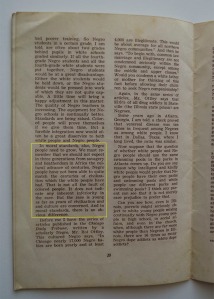